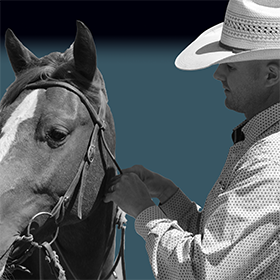 Robert Rivers (Elgin, Tx) will be your guide for VRH. Robert was raised using horses primarily for working cattle and team roping on their family ranch. He was first introduced to showing at Texas Tech University, while competing as a member of the ASHA National Champion Ranch Horse Team in 2009 and 2010. He later went on to coach the TTU Ranch Horse Team, while pursuing a Master’s degree from 2013-2015, and won the 2015 ASHA Collegiate National Championship. He has worked for rope horse, reining, and cow horse trainers, and now applies his own training program to versatility ranch horses, reined cow horses, and rope horses. Robert and his wife Rebecca compete in NRCHA, AQHA, SHTX, RHAA, and roping events. Rebecca will also be sharing some of her perspective and knowledge as a non-pro. Robert strives to build confidence in the horses he trains and the riders he coaches.

“Competing in the arena can’t be the hardest thing your horse has ever done.”

The world’s only video on demand service devoted entirely to the foundation of your horse.

Videos are for HorsePro members only